Let’s see…When we left off, I had just posted about our visit to  the quilt exhibit at the MFA.  Coincidentally, not long after, I received an e-mail announcing a new collection of embroidery designs, Modern Blossoms, coordinating with  Amanda Murphy‘s Soda Pop Quilt pattern. 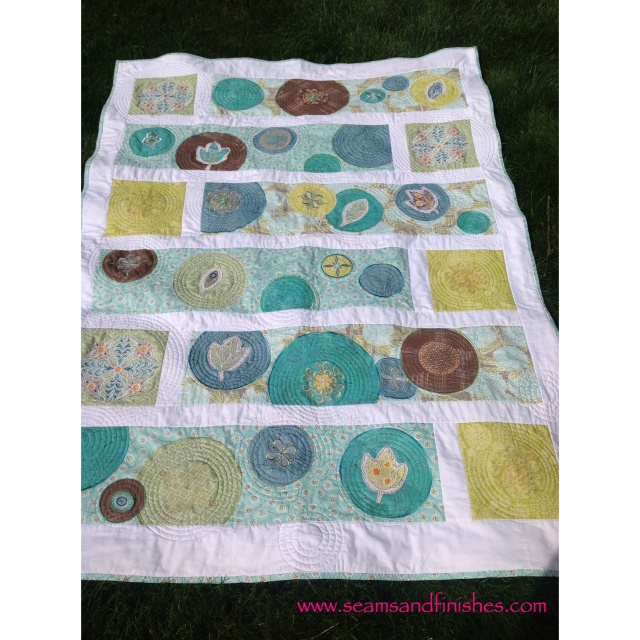 The scene was set.  I ordered the designs, and soon set out to locate the pattern in a nearby shop. It turned-out to be a  very successful shopping trip and included picking up some of the fabrics for the project!  I was excited to get started but was in the midst of a Christmas quilt gifted to me last year that I wanted to complete for the holiday season.

So, after Christmas I finally got started. 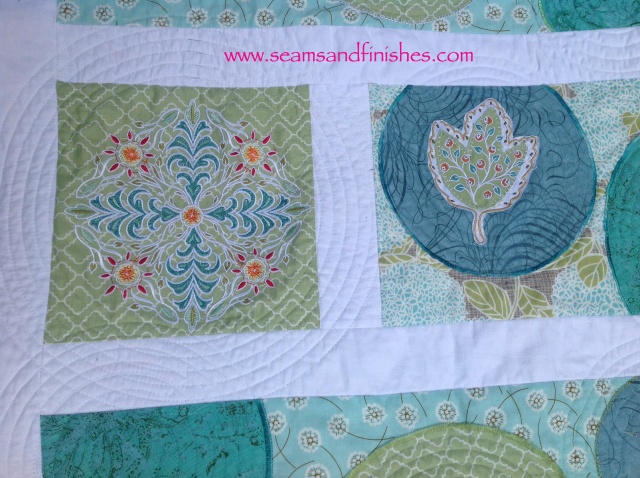 When the first design (seen on the left) was loaded into the machine, it told me the stitching time for that design would be 2 hours.  The leaf on the right is an applique with embroidery used to tack it down and embellish on top.  In total, I think there are 25-30 different designs that I chose to use, but the stitch-out time for each design varied.

Once the the embroidery was done, and the quilt top completed, I had to figure-out a way to layer this quilt, keeping the layers flat.  To be honest, this is the largest and most complex quilt I’ve ever made so there’s lot of material to contend with!

Problem solved through a YouTube video where Sharon Schambler demonstrates just how to do this! 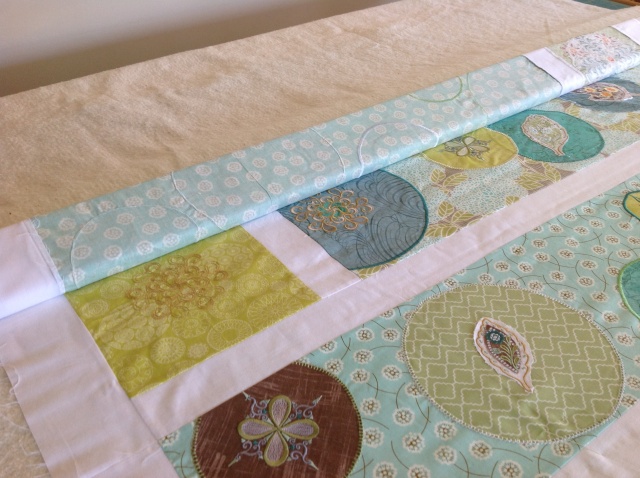 Next was deciding how to do the actual quilting.  I really liked and wanted to duplicate (if possible) the concentric circles that are seen in the original quilt and I knew that probably the only way for me to do that would be  by embroidery machine.  So I digitized a few concentric circles in my software for the quilting. 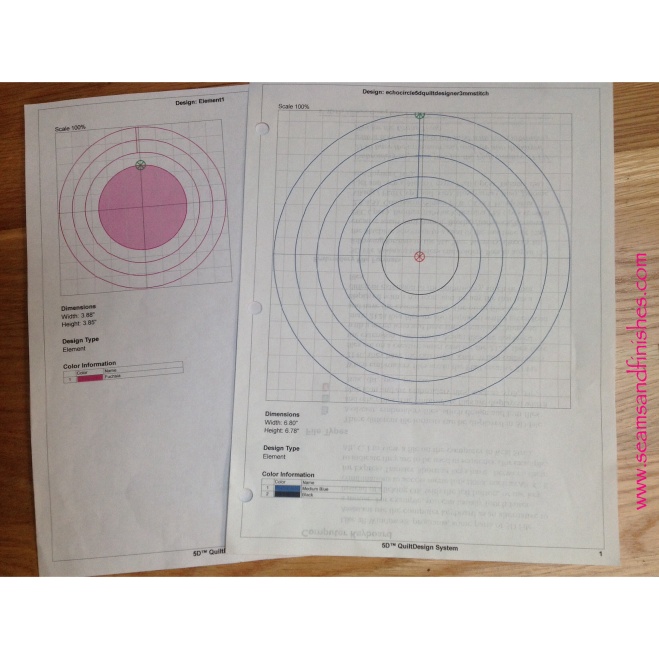 I used a 200x200mm hoop for all of the circles with the exception of the largest design which needed to be split for two hoopings in the 360×200 hoop.

Due to the size of the quilt (48×66″), I moved my machine to my cutting table so the weight of the quilt would be supported.

Working on this project was challenging at times, but it was a great learning experience.  I know that more experienced quilters talk about signing your quilt with your name & date .  So in that vein…

I even made a label. 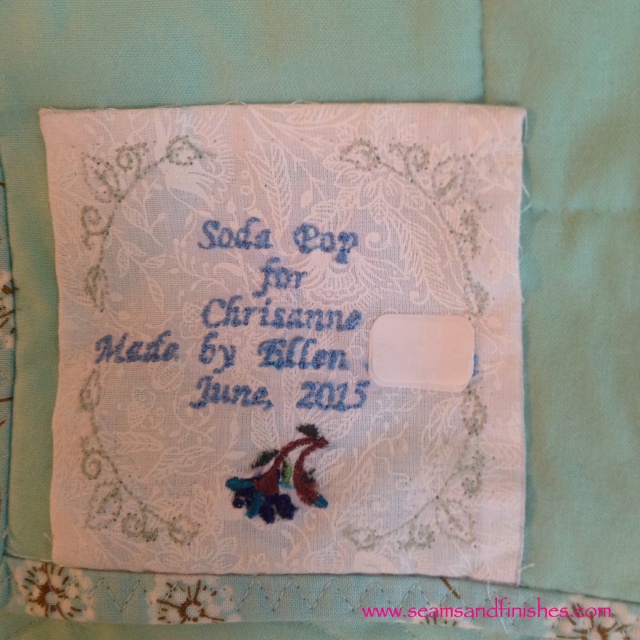 You may have noticed that some of the sewing bloggers you read have been exchanging handmade Christmas ornaments and posting tutorials demonstrating how to make them too!

I submitted my name as a participant, and decided that my handmade ornament would be to make lace snowflakes!  The bonus here is that you can either hang them on your Christmas tree, or enjoy them in a window throughout the winter season!

if you are not familiar with machine embroidery, these snowflakes are known as FSL, or Freestanding Lace.  I purchased these particular designs from Snowlady Designs but there are many other vendors of lace designs.

After downloading the design to my computer software, I duplicated the design as many times as I could fit into my hoop and then transferred that to my machine.

Here is a print-out of the snowflakes as they will be stitched. 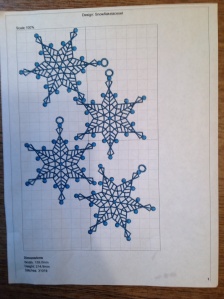 Next, I hooped a thick water-soluble stabilizer, pressed the “start” button and watched them stitch! 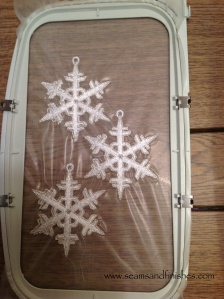 Once they are done, unhoop and trim around each snowflake before soaking the snowflakes in water to dissolve the stabilizer. 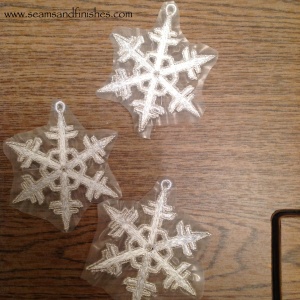 When they are dry, I like to give them just a touch of white glitter paint! (Sometimes a little more than a touch!)

Here are the finished snowflakes I made for the exchange: 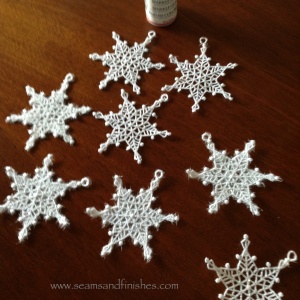 And here are three different ones that I just made from the same designer. 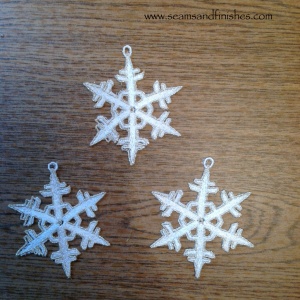 My mailbox has brought me some delightful handcrafted Christmas ornaments over the past few days and introduced me to some talented and creative bloggers whom I might otherwise not found.

I hope you have a moment to stop by and enjoy these lovely blogs too!

With Thanksgiving fast approaching, I have just completed these additions to a set of dinner napkins I made as a Christmas gift last year. 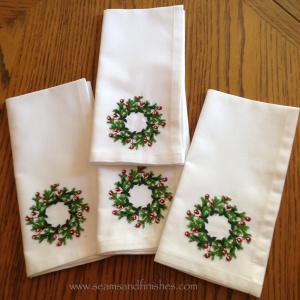 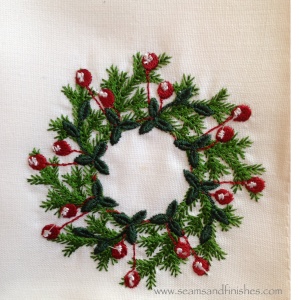 This cranberry wreath design is one I fortunately picked up  from a site which is no longer available.  The digitizer, Dancing Threads now markets her designs here, but this design is not among her current collection.  I keep checking back, hoping to see any other “cranberry inspired” designs as they are perfect for gift-giving to friends involved in the cranberry industry!

And while we’re on the subject of cranberries and Thanksgiving, I thought I’d share a “traditional” favorite: 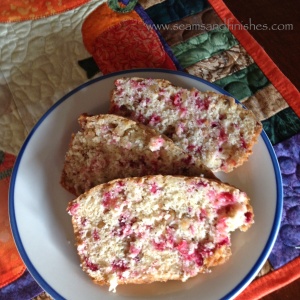 Bake for 55 minutes or until a toothpick inserted in the center comes out clean. Cool on a rack for 15 minutes. Remove from pan; cool completely. Wrap and store overnight. Makes 1 loaf (16 slices).

The recipe can be found here, along with many others…

Before I forget, you still have time to leave a comment on my last post if you would like to win some “crafty patterns” in the Craft Pattern Pyramid!

I have a special birthday party to attend next week. The Birthday Boy, born on 9/9/09, will proudly tell you that “I’m growing-up. I’m going to be four”

Well, I don’t know where those four years have gone, but I’ve had a collection of embroidery designs for longer than that begging to be used…

I hunted for these on Ebay after seeing a sweater using several of the designs in Sew News. I was lucky to have found the collection, as it is no longer available from a dealer. 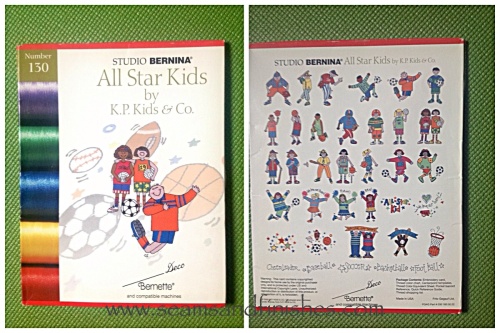 Changing the hair color required “zooming-in” on the design and viewing a simulation of the stitch-out on the computer. As I watched the player, I was able to insert a new color, and then resume the black thread color. Getting the stops in the right place is important, so that a yellow outline on the soccer player and a yellow soccer ball can be avoided!

As I mentioned, this sweatshirt has a hood, and a scherpa lining. Ideally sweatshirts should be “hooped”, but because of the sleeve, hood and bulkiness of this project I did the following: 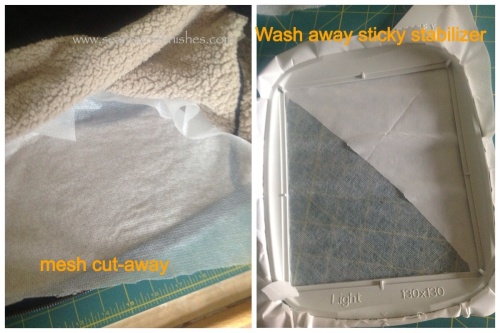 Cutaway stabilizers are recommended for embroidering on knits so that the stitches don’t wobble and distort during the stitching and the design is well-supported on the garment.

Attach the hoop and “fine-tune” so the needle penetrates at the center of the design. Baste around the design, if your machine does this, so that the garment & stabilizer are attached.  I recorded the coordinates of the center after adjusting, just in case. I’m living dangerously and did not do a test stitch-out… 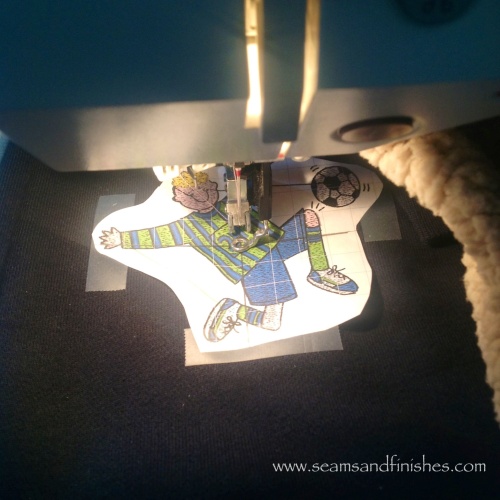 Some people leave their machines to embroider by themselves, unsupervised.

Some people use baby monitors to listen for problems in “Embroideryland.”

I am not in either of those camps. I watch like a hawk. I hold my breath (sometimes, like today) so that I can hear the clunking of a bird’s nest in-the-making, or watch the innocent needle falling out from the vibration, or having to re-thread after a thread break. All of these things happened today.

After tending to these hiccups, I came close to needing the initially recorded coordinates having found it necessary to remove the hoop from the machine while performing minor surgery (during the final color block, of course!)

Ninety minutes after sitting at the machine, we have success. 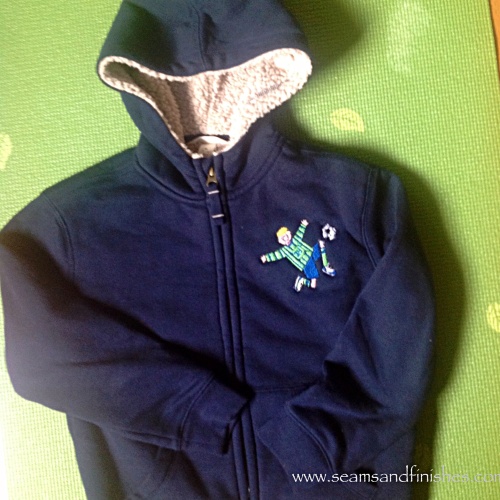 Ayden will be ready for soccer.

One of my favorite machine embroidery designers is Kara Sutton of Kreations by Kara.

Occasionally, I find myself wandering over to her site …(ok, maybe more often than occasionally).

Anyway, while I was there one time, the most beautiful collection of Dandelions just jumped into my shopping cart! Amazing. It all happened so quickly! 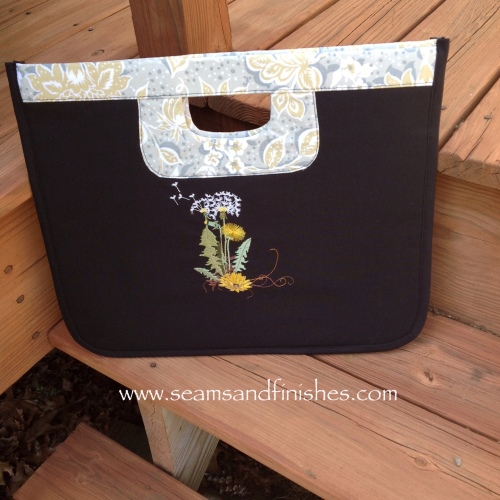 I found the perfect canvas for my embroidery with this Laptop Satchel pattern from Vanilla House designs.

The satchel interior features a divided pocket and an additional zippered pocket for holding keys, phone, pens etc., alongside your computer and other documents. It makes a great gift too.

I had so much fun making one, that I had to make another! 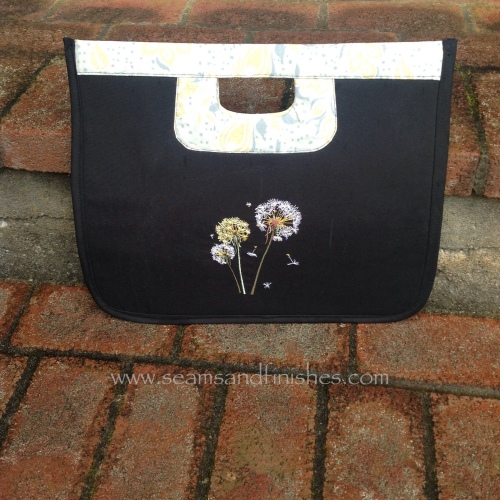 The first one I donated to a silent auction family benefit. It's always a good feeling being able to turn your hobby into something to help others.

The second satchel was my daughter's choice.

Lets see, now…I have a “few” more designs from Kreations by Kara, but I do not yet have one of these satchels. Hmm, I wonder what I can do about that??

My experience with yoga does not extend much beyond Wii Fit and similar DVD exercise routines (admittedly not practiced on a regular basis).

However, with all good intentions of exercising more during the winter months, I did something that is still referred to as: “I still can’t believe you did that!” Which is wait in line at Target (I was #3), before the store opened in the hopes of purchasing one of the 12 systems they had in stock.

Arriving at Target that early morning, I joined with a handful of other customers, most likely there to secure the scarce and coveted Wii.

At 7:00 AM, security guard and a store Associate promptly came to the door, and asked if we were there to purchase the Wii. When our intentions were confirmed, each of us were handed “Golden Tickets”and escorted as a group to the electronics counter to make our purchases. I was back home and my mission completed by 8:00AM! It was unknown that I had even left the house!

I’m leading up to the dramatic sewing part…

Based on the introduction to Yoga on the Wii, my daughter has been a regular practitioner of this exercise, attending a weekly class and often using a Yoga App or other online in-between.

As any machine embroiderer might know, any hobby, interest, affiliation or celebration is worthy to be championed by embroidered embellishment! So I just happened to find these Yoga Designs, and decided they would be *necessary* for my Embroidery Designs Collection.

A towel would be the ideal project for one of these designs! After all the pre-embroidery preparations, I was ready to get down to business at the machine. The first basting around the hoop/design was perfect and the first part of the design, the word “Namaste” was about to be stitched. About at the middle of the letter “m” the machine was very unhappy- noises, growls,- snap- needle breaks- re thread, re-start- things are sort of okay, but maybe not. The word was finished, it looked fine, so I continued through the color changes and completed the design. Flipped it over to see BIRD’S NEST behind Namaste. That will never fly. ( Didn’t mean the play on words, but it is none-the-less appropriate.)

The secret is never to unhoop until you are sure that the stitch-out is successful, so if you have to rip-out or “negatively stitch” something, you have a better chance of getting your design lined up properly.

Here is my design after ripping-out those stitches. 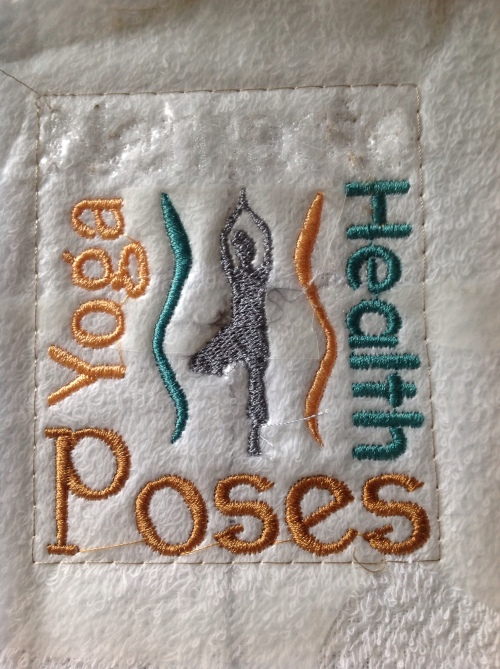 And here is the finished one 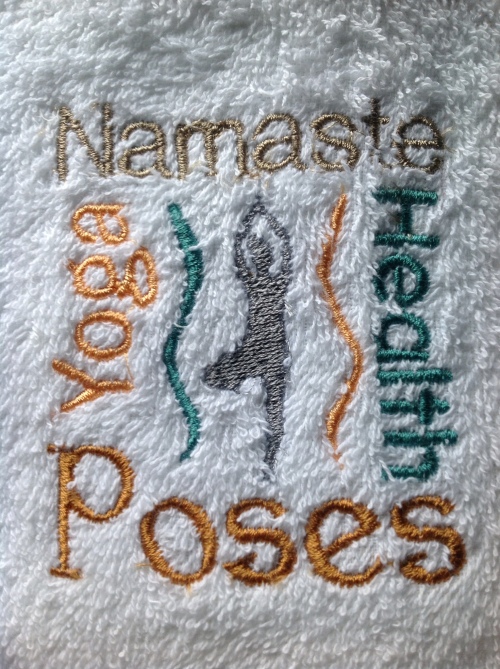 Ripping-out and re-doing is part of the sewing process. In fact, when the need arises, I find myself thinking about and planning the next steps in the project, etc. There is a mantra to this. I think it’s very “Zen”, sewing Zen.

Do you have a “Sewing Zen”?