As you probably know, Boston is home to people of many nationalities and cultures. But as an old Irishman once said, “On St. Paddy’s Day there are two kinds of people: the Irish and those that wish they were!”

Perhaps not the most “politically correct” statement to be made, but in the spirit of celebration- everyone can enjoy a good time, regardless of your ethnicity or beliefs.

If you live in Suffolk County, March 17 is also a legal holiday- Evacuation Day, marking the day in 1776 when the British left Boston Harbor during the Revolutionary War.

The big South Boston parade (which I have never attended) was on the 16th, but the St. Patrick’s celebrating apparently started early on the week-end.!  We had tickets for the Boston Ballet performance of Cinderella (which was awesome, btw) on Saturday night so decided to have dinner at Quincy Market before the show. Already,there were many revelers dressed in all shades of green gathering in groups or standing in lines to enter the various restaurants and bars. Lots of spirit and fun was evident, and the evening had not yet begun!

A few hours later, on our train ride home we seemed to be in the “party car” with some “celebrants” singing and attempting to dance ??? at 60mph???  They were enjoying themselves!

Now, onto other things!  How about this table runner made from San Francisco Stitch  Company?

This was such a fun project and I’m thrilled with how it turned out.  All of the embroidery and quilting is done “in the hoop” by machine. 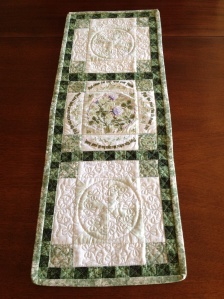 I think this table runner will be lingering on my table for a while longer, too.

7 thoughts on “An Irish Blessing!”